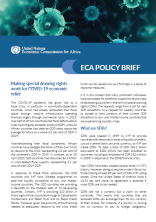 The COVID-19 pandemic has given rise to a fiscal crisis, in particular in commodity-dependent countries, which had already exhausted their fiscal space through massive infrastructure spending financed largely through commercial loans. In 2019, over half of African countries had fiscal deficits above 3 percent of gross domestic product (GDP), while 22 African countries had debt-to-GDP ratios above the average for Africa as a whole (61 per cent of GDP in 2019).

In response to these fiscal pressures, the G20 countries and IMF have initiated programmes to ease the liquidity constraints of low- and middle-income countries. The G20 countries are providing a standstill on the bilateral debt of 73 developing countries. Similarly, IMF is providing $10 billion in financing to African countries through its Catastrophic Containment and Relief Trust and its Rapid Credit Facility. However, given the enormity of the financing needed to adequately respond to the crisis, these funds can be viewed only as a first step in a series of response measures.

It is in this context that many prominent individuals have advocated for additional support to be provided to developing countries in the form of special drawing rights (SDRs). The requests range from a call for new SDR allocations, to a request for wealthy countries to donate or lend portions of their current SDR allocations to low- and middle-income countries that are experiencing liquidity crises.