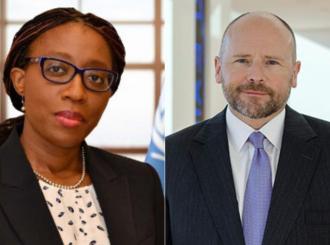 By Vera Songwe and Scott Mather

The African Continent today stands at a sustainable development crossroads.

On the one hand, the economic and governance picture suggests that Africa is poised to play a major role in the world—with burgeoning trade, investment, and demographic and population trends that, while posing living standard issues, also promise robust and expanding markets.

The political landscape also continues to strengthen with greater peaceful transfers of power, improved regulations, and economic integration within regional blocks as well as the implementation of the Africa Continental Free Trade Agreement.

Unknown to many, Africa, over the past six years, has consistently topped the ease doing business assessment in terms of the number of business regulatory reforms, particularly with regard to  contract enforcement. Furthermore, many of the non-resource rich countries have registered consistently high growth.

At the same time, Africa's sustainable development challenges are real and serious. While it is difficult  to generalize about this vast and enthralling continent, widespread poverty remains a fact of life in many countries, overall Africa  suffers from a range of environmental threats and problems—including climate change, water pollution, sanitation deficits, and deforestation.

And then there's energy.

The lack of energy – traditional or renewable – for health care, agriculture, education, and economic diversification remains a critical barrier to overall growth and prosperity on the continent.

According the Economic Commission for Africa, nearly 600 million Africans (about half the population) lack access to electricity, with 110 million of these living in urban areas—all within proximity of existing power grids. Failures and inefficiencies in energy transmission infrastructure, combined with high costs of last-mile connections to rural communities and other factors, mean that many Africans are moving off-grid – choosing expensive options like generators and in some instances constructing home and mini-grid solar systems in their communities.

While these energy innovations are to be welcomed, they are in the end an unsustainable solution in a continent where the pace of electrification will in no way keep up with rapid population growth. Indeed, the development imperative is that building the energy sector, at scale, is critical for the realization of the regions Agenda 2063 and the UN Sustainable Development Goals (SDGs)—given the severe and chronic shortages of electric power.

However, not all energy is created equal—or results in the same sustainability outcomes.

The exciting news is that while many countries in Africa continue to generate the majority of their power from fossil fuels, including dirty coal, a clean-energy revolution is quickly gripping the continent with already close to 9,000 megawatts of non-hydro renewable power (mostly solar and wind) online in 20 countries. Kenya, for example, derives three-quarters of its electricity for renewable energy, while 97 percent of Ethiopia's electricity    is from renewable sources.

But bolder and more concerted action is required.

On 11 February 2020 in Addis Ababa, on the margins of the African Union Summit on,  the United Nations  Economic Commission for Africa and the investment firm PIMCO, associating Africa50, the Development Bank of Southern Africa and Nigeria Sovereign Investment Fund , will announced  the "SDG 7 Initiative for Africa," inviting a host of African Heads of State and Ministers to join this compact to bring more clean energy to Africa.

So-named for its link to the Sustainable Development Goal 7 on "clean and affordable energy", this initiative has already begun to scope the clean energy project and investment opportunities in a number of countries, including Ethiopia, Senegal, Kenya, Togo, South Africa, and Morocco.

The overall objective of this new initiative is to add an additional 10,000 megawatts by 2025 to Africa's electricity capacity—all in the form of clean energy, including solar, wind, hydro, and geothermal.  Some of these projects will be pure public sector, others will be private sector, and some public-private in nature.

For local and international investors, especially those with a sustainability mindset, we believe these opportunities will be compelling – both in terms of risk-adjusted returns as well as the positive social and environmental impacts.

For African governments, our hope is that this initiative and the related projects will help them in realizing their nationally determined contributions to climate action (NDCs), that is, their national goals in relation to the Paris Agreement on climate change.

An economic as well as a moral imperative.

Africa is a continent brimming with hope, opportunity, and dynamism—but also a region struggling with fulfilling basic needs for the majority of people. Providing access to clean, affordable, secure and reliable electricity to current and future generations must be a priority—an economic as well as a moral imperative.

We hope the "SDG 7 Initiative for Africa" will help contribute to this vision, help countries with their NDCs, work to improve energy sector governance and crowd in finance — and we invite you to join us.