A Digital Africa - Technology can be a springboard for faster, more inclusive growth 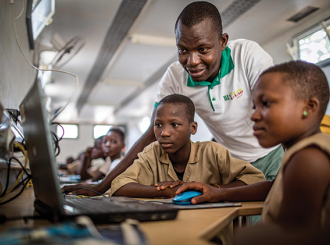 As more nations have made the transition to technology-enabled platforms for services, low-income countries have not been left out of the digital boom. With the right policies, they stand to benefit the most.

With digitalization come opportunities to leapfrog development. Digital technology lowers costs and enhances efficiency while safeguarding inclusion. For low-income countries, it provides a way to deliver services when traditional institutions are weak. Yet the potential is far from being realized. That will require additional investment in information and communication technology (ICT) infrastructure, an enabling policy environment, adequate skills, and steps to ensure privacy and security.

Africa in particular faces many challenges. While growth is recovering and expected to reach 3.5 percent in 2019, the continent needs to triple its growth to achieve the United Nations Sustainable Development Goals. With about 33 percent of the continent’s population living in extreme poverty, 0.6 percent GDP growth per capita is too low to be of much help. Governments, with debt averaging more than 50 percent of GDP, have little room to invest in economic and social infrastructure. More than 60 percent of the population lacks access to financial services. There is a need to do more, and digitalization can play a crucial role.

Low-income countries worldwide are struggling to maintain growth amid a slowdown in global demand and a decline in commodity prices. While diversified exporters appear to be faring the best, rapid investment in infrastructure is stretching their budgets. Low-income countries must increase savings, improve the quality of investments, and—most important—raise new investments’ rate of return in order to manage debt and open up fiscal space for social sector spending.

The digital economy can help achieve these objectives in three ways:

First, improving the efficiency and transparency of government services can generate impressive savings. Using digital technology, Rwanda was able to increase annual revenue by more than 6 percent. South Africa reduced the cost of tax collection by 22 percent. By shortening the time needed to open a business, using e-commerce platforms, countries such as Mauritania, Rwanda, and Senegal have fostered growth in small and medium enterprises. India saved a staggering $99 billion through the Aadhaar digital identity system, which lowers the cost of delivering services while extending them to a greater share of the vulnerable population.

Innovative software applications are also playing a role. In Malawi, onebillion’s onecourse, a software application that teaches reading, writing, and mathematics, is helping improve numeracy in grades 1–3 and narrow the gender gap in reading and mathematics skills, according to a study published in Frontiers in Psychology. Babyl, a mobile app implemented in Rwanda, asks patients about their symptoms and gives them information and a referral when necessary. Babyl reaches 30 percent of the adult population and hosts an average 2,000 consultations a day, according to Mobile Health News.

Second, technology can help low-income countries improve the environment for small and medium enterprises, including through better access to financing. One such opportunity is in e-commerce, which is particularly suited to the micro, small, and medium enterprises that constitute more than 80 percent of African businesses. E-commerce platforms provide access to a broader range of buyers. Some platforms offer services—payment processing, customer service, shipping, return handling, and delivery—that significantly lower costs.

Digital technology is a lever for financial inclusion. The Nigerian money transfer network Stellar brings affordable financial services such as banking, micropayments, and remittances, to people without access to financial services. Mobile money also provides access to more complex financial products. In 2017, Kenya launched M-Akiba, a government bond sold exclusively via mobile money, for as little as K Sh 3,000 (or US$30).

Third, the digital economy is opening up the service sector, a growing share of the economy of many low-income countries. In fields from transportation, to delivery, to medical diagnostics, to accounting, low-income countries can find an area of comparative advantage with the right policy environment. For example, iSON BPO has more than 10,000 employees across call centers in Nigeria, Ghana, Liberia, Sierra Leone, Burkina Faso, Chad, and Niger. Mauritius employs 12,000 people in the business process outsourcing (BPO) sector. In Egypt, the business consulting firm Frost & Sullivan estimates the BPO market at more than $1.2 billion. In the Philippines, BPOs generate one-third of total export earnings and employ 1.3 million.

The Brookings Institution estimates that mobile technologies and services in Africa had generated more than $150 billion in economic value as of 2015. The mobile ecosystem supported 3 million jobs and contributed almost $14 billion in tax revenue in 2017. The investment firm Partech Partners estimates that in 2018, African start-ups, mainly in the information technology sector, raised more than $1.1 billion, demonstrating that the digital economy is gaining momentum in Africa.

Yet these gains represent only a small proportion of the benefits a digital economy can yield for Africa’s development. Despite more than 30 years of ICT implementation, African countries lag in ICT infrastructure and access, use, and skills. While mobile penetration was estimated at 44 percent in 2017, internet penetration averaged just 20 percent, with wide variations—from 90 percent in Kenya to 3 percent in Niger. Only 7 percent of African households subscribed to high-speed internet services in 2017.

The good news is that many African countries and regional organizations are putting policies, strategies, and regulations in place to take advantage of the opportunities presented by digitalization. Deliberate investment in technology infrastructure and an enabling environment that rewards innovation could deliver substantial results.

It can be argued that technology is the most likely catalyst for inclusion. Why? Because of the relentless lowering of costs for computing, storage, networking, displays, internet access, and related elements. The average cost of a mobile phone with some of the features of a smartphone fell from more than $200 in 2008 to $20 in 2018. From 2012 to 2017, the cost of 500 megabytes of online data fell from almost $30 to $5. Such cost decreases are a powerful economic force that can drive inclusion and increase participation of women in the workforce. Inclusive growth in the BPO sector can be at least partially attributed to this factor.

As important as it is for each country to create an enabling environment for technology, the real benefit accrues from interoperability between countries. That requires regulation and harmonization. Think how limited the value of phones, email, or the internet would be if they worked only within each country, instead of globally. The advent of the African Continental Free Trade Area (AfCFTA) will offer a framework for developing technology standards, harmonization, and interoperability to support cross-border commerce.

Digital technology will play a dual role in turbocharging the free trade area. It will spur cross-border trade by speeding implementation, automating processes, and reducing costs. New areas of digital commerce and services will open up, including unlocking the supply chain logistics nightmare in many parts of Africa. Mobile devices, broadband networks, cloud services, the internet of things, and big data analytics could significantly lower the cost of planning, scheduling, tracking, delivering, and managing goods, opening up a massive opportunity to create jobs.

It is critical that the benefits of digitalization be spread across the entire population. Perhaps 500 million Africans lack a legal identity. This implies that about half of the continent’s people are unable to meaningfully contribute to economic growth or to access services to improve their well-being. Digital identity, the ability to verify an individual’s or business’s identity electronically, is the basis for digital economy platforms and provides a powerful solution to the identity crisis.

At the African Union Assembly of Heads of State and Government in February 2019, the United Nations Economic Commission for Africa was asked to collaborate with the African Union Commission, Smart Africa, and others to develop a digital ID and trade strategy—a clear sign that African leaders are aware of the urgency of the problem. The digital economy thrives on trust. It is crucial therefore that African countries have adequate regulation, particularly around data privacy, data governance, and digital security.

Digital infrastructure, digital skills, and additional investment are needed to realize the full benefits of the digital economy on the African continent. African Development Bank estimates indicate that just 2.6 percent of infrastructure disbursements in Africa went to information and communication technology in 2016. The AfCFTA represents a powerful vehicle to attract additional investment in ICT.

Macroeconomic stability enables both public and private investment in digital infrastructure and skill development. At the same time, digitalization offers opportunities to address structural issues affecting macroeconomic stability, such as revenue mobilization, debt management, and public expenditure management. The IMF, through its analytical work and policy dialogue with low-income countries, can help promote awareness and policy options for exploiting the links between macroeconomic policy and digitalization. Similarly, state institutions must be able to develop standards and regulatory frameworks to maximize gains in the digital ecosystem while minimizing associated risks.

VERA SONGWE is executive secretary of the United Nations Economic Commission for Africa.