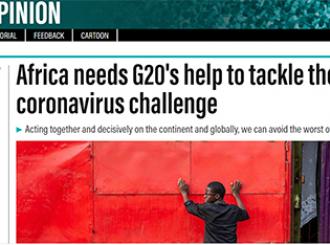 Not since our species first emerged out of Africa have we been so linked as one human family, sharing so many common opportunities and threats. So, when world leaders met virtually as the G20 on Thursday to plan humanity’s global-scale Covid-19 fightback, it was in everyone's collective interest that Africa sat centrally within that strategy – central to the global health response, as well as the economic and jobs response.

A month ago, Microsoft founder Bill Gates warned of a potential 10 million deaths in Africa due to this outbreak. Indeed, the impact of the virus on Africa threatens to surpass any that we have seen owing to weak health systems – hospital beds per population, for instance, remain one of the lowest in the world – congested urban dwellings and deadly social networks, normally our strongest asset. While the technological revolution has taken hold in many places, with tech start-ups flourishing and internet access having increased, we are still the most unconnected continent in the world with the highest average costs and smallest bandwidth. These are tremendous handicaps.

Acting together and decisively on the continent and globally, we can avoid the worst of fates. Since the first case was reported in Africa five weeks ago, the numbers have escalated, mirroring those of other continents.

Different countries are facing different challenges – and therefore responding in different ways. In Senegal, the government launched a stimulus package but is struggling to manage the repercussions of mass gathering at religious sites. So are many others. In Kenya, the government has made use of its expansive mobile system and connectivity to launch measures such as cost-free remittances. South Africa, a country with one of the best healthcare systems, has gone from a measured reaction to martial law. Morocco’s famed Jemaa El Fna Square stands eerily empty, with few tourists around as the country finds itself in lockdown.

On Mother's Day last Sunday, many in the West had sent for African-sourced cut flowers in lieu of visits. But out of Nairobi and Kampala, the cut flowers are no longer being exported by air freight, threatening thousands of jobs in global supply chains that have been dramatically snapped.

Africa must therefore act in unison, as part of the global co-ordinated response, in order not to exacerbate the impacts on its populations.

A strongly equipped Africa is key to our collective insurance. This requires swiftly addressing the finer details in the three-pronged co-ordinated package, which the continents’ finance ministers outlined when they met virtually last week.

The first step is to bolster the immediate health and humanitarian response already under way. G20 leaders should support open trade corridors, especially for preventive health supplies, pharmaceuticals, food and the immediate upgrade of health infrastructure and data systems to track incidence. Countries can focus on information and prevention as they reinforce and build curative facilities.

Agencies such as the World Health Organisation and the Africa Centres for Disease Control and Prevention can facilitate this task with the help of funds channelled through, or sourced from, the financing organisation Global Fund, the vaccine alliance GAVI and elsewhere.

The second task is to deliver an economic stimulus. The US and UK have announced packages of up to $2 trillion and about $320 billion to boost their respective economies. Several other governments have done the same. However, global leaders should now commit $100bn through their traditional partners – such as the World Bank Group, IMF, African Development Bank and the European Union – to fund the health response, protect the most vulnerable and save jobs. This will be in addition to the $50bn of funds that have already been committed.

To ensure immediate fiscal space and liquidity, this package should include waivers on all interest payments, estimated at $44bn for the year. G20 leaders should also support waivers on principal amounts, as well as interest payments, for money lent to fragile African states, such as those in sub-Saharan Africa, which have limited fiscal space and are currently struggling with conflict. China will have an important role to play in this regard, but many private banks in the West should also contribute to such a package. Meanwhile, civil society stakeholders should be empowered to hold everyone to account.

Finally, we must protect the private sector and the more than 30 million jobs immediately at risk across the continent, particularly in the tourism and airline sectors. To this end, G20 leaders should take measures to support agricultural imports and exports, as well as the pharmaceutical and banking industries.

An extended credit facility, refinancing schemes and guarantee facilities should be used to waive, restructure and provide additional liquidity. G20 leaders should support a liquidity line, to be made available to the private sector operating in Africa, in order to ensure that essential purchases can continue and all SMEs dependent on trade can continue to function.

As African finance ministers work towards a co-ordinated approach to the emergency, a strong and collective response from G20 will give Africa a leg-up in planning and preparing to "flatten the curve" – essentially to stagger the number of new Covid-19 cases over a longer period – before the full brunt of its impact hits the continent.